Nearly two thousand years ago, the world’s first evangelist stood up and began wielding the most powerful cultural transformation tool in history: Christian evangelism. That man was John the Baptist. He had the mind-boggling privilege of introducing the world to the First Coming of Jesus Christ. John also baptized the Saviour of the world. What a resume. During his time however, John was the equivalent of a crazy hippie in the eyes of many Jews. Israel was a dignified nation and the center of their culture was their religion. As God’s chosen people, they firmly believed they had a religious tradition second to none. No other civilization in ancient (and modern) history based their identity on special relationship to God the way Israel did. So firm was the Jewish conviction of having dealt directly with the Creator of the Cosmos, that the Romans, Assyrians, Babylonians and German empires could not sever the Jewish identity from their Scriptures and religious customs. Even with annihilation of their country, hundreds of years of exile, forced slavery and attempted genocide. This a completely unique historical phenomenon.

During the time of Christ, the powerhouse Jewish culture had constructed a religious institution that formed the foundation of their laws, education and customs. At the head of this institution were the Pharisees and Saducees, the 1st century Jewish equivalent to double PhD seminary presidents and government officials. Total power. Total respect. The height of achievement within the Jewish world. People within Jewish culture were classified by the Phariseeic leadership into hierarchies of purity — not unlike the Hindu cast system. And the constraints laid upon the people were iron-clad. No one questioned the authorities. If they did, it was behind the closed doors of their homes. Then came a wild eyed, half naked man known only as John the Baptizer. His diet consisted of candy-coated bugs and his route to “power” had been anything but traditional. He was not a graduate of the Jewish “Harvard,” he was not even a scribe, lawyer or synagogue official. He was completely outside the system. John’s “office” was not even “downtown.” Instead he strolled through the boonies and had the dress code, hair style and bug-leg-in-his-teeth that made him look like a candidate for therapeutic medication and forced psychoanalysis. Yet, Christ called John “the greatest man who ever lived.” And the very leaders of the monolith institutions of Jerusalem came out to see him. They lowered themselves to leave their seminaries and palaces, their assistants in tow, and go hiking in their three piece suits to hear John speak.

Where does this type of power come from? The Holy Spirit. In Luke 1:15, the New Testament records that God filled John while he was in his mother’s womb. He was chosen by God and empowered by God for the work of evangelism. Can we be benefactors of the same type of authority as John the Baptist? Yes and no. We are called to make “disciples of all nations” (Matt 28:19) and we have the free gift of salvation and the Holy Spirit which empowers us to the same ends as John the Baptist = evangelism (John 16:7-8). We are not going to have the privilege of being the “voice in the desert” that announces the First Coming of Christ but we do have the authority to announce the Second Coming of Christ. And the Second Coming will be much more noticeable. We may not have the privilege of baptizing Christ, but we do have the privilege of baptizing Christians. All in all, we are not to emulate John the Baptist’s life in regards to style. Thank God. But we are consumed by the same Spirit which gives us the same mission. I don’t eat bugs. Never will. I will always dress in white collar office gear. But I will never be cut from the same cloth as my co-workers. There will always be a sense of “oil and water” between them and I. Because as much as John would have insulted my comfort zone, he is definitely my teammate. We both share the same Spirit.

Paul the apostle was a championship level, “up and coming” Pharisee. Fortunately for him, he also happened to become a born again follower of John the Baptist’s promised Christ. Paul was everything John was not. Refined, incredibly knowledgeable and totally traditional as a Jew. A Jew of Jews. Paul’s missionary work literally founded the Christian church. History’s most potent sociocultural phenomenon. Was his education the most important factor? No. He often boasted of coming to his newly founded churches in weakness and fear as well as speaking foolishly. Yet in Acts chapter 17 he addressed the Greek world displaying his understanding of their philosophy, poetry and creeds. After all, Paul was a roman citizen who had enjoyed classical greco-roman training on top of his Jewish Ivy League education under the legendary Gamaliel. 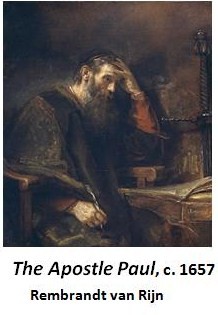 The point is… it doesn’t really matter. God can use anyone at anytime for anything. A willing spirit in His hands is a deadly force against the enemy. A martial arts master can turn anything into a lethal weapon. God is much more potent than any human master. He can do more with less. And in fact, He prefers less. Not in terms of limited intellectual capacity, but in terms of competing wills. If we will what He Wills, we find ourselves in the raging rapids of His Power, Love and Mission. And nothing can stand in our way. Nothing. Let go of your own understanding and draw close to Him. He has revealed Himself intelligently through Scriptures, nature and history. Know the boundaries. But also know the freedom within those boundaries. Seek Him in a private and personal way as well as a traditional and well reasoned critical journey.

In order to keep this brief history, well brief, let us fast forward to me and you. Here we are in 2009. What now? The answer is in Scripture. Our mission was laid out for us by Christ in John 16:8. To convict the world of sin, righteousness and Judgment through the power of the Holy Spirit. Now Christ and John the Baptist simply spoke the gospel in public. Is this the limit we should constrain ourselves to? Well, it is perfectly necessary to preach in public (and usually this means one to one relationship evangelism), but the very existence of the New Testament ushers in the obvious reality that although God in the flesh never put pen to paper (or quill to papyrus), He utilizes other communication mediums to preserve and spread His pure and precious Gospel. Eventually the printing press of the 15th century opened an entirely faster and more aggressive manner in which to spread the Good News.

Radio and televsion jumpstarted the ability of preachers to inject the Gospel into millions of ears. Something impossible even in the grandest arena of our current world. New technologies have entered human culture and continue to come. From Christ’s spoken words to the apostolic pens. From their pens to the pens of the church fathers and early Christian philosophers to the printing press of the reformation fathers and also to the radio and television addresses of 20th century evangelism. Evangelism is the message regardless of the medium. It is to adapt and flow in ALL cultural and historical and technological contexts.

Which finally brings us to me, you and Youtube.

Please realize that the generation born between 1980 and 1995 have inherited a new reality. The online reality. The amount of written material these men and women carefully read and digest has dropped and continues to drop steadily. They watch videos. Lots of them. They want to see and hear the message and the messenger. The audio-visual format of John the Baptist and Christ have returned full circle. More people will see and hear the gospel in our generation then they will read it. It is estimated that the current online community is over one billion! This is nearly 5 times the world population alive in Paul’s day. It is countless more than the audience Billy Graham had access to via his television ministry. The potential online audience of a single popular Youtube video is in the millions. The times “they are a changing” as Bob Dylan prophesied. The online empire of Youtube allows a man sitting in his living room with only a computer and a web cam to reach an audience in the thousands and sometimes hundreds of thousands. Recently, Google bought Youtube and has absorbed all of Youtube’s content into their Google Video site. Creating another online mega warehouse of audio-visual information. Let us prayerfully make use of this inescapable reality. It is an incredible field of harvest that is not going away anytime soon.

Luke 4:43 records Jesus when He said: “But He said to them, “I must preach the kingdom of God to the other cities also, for I was sent for this purpose.” The crowd wanted Him to stay with them. But He was on the move. And we are to be on the move. Move the Message, push the Good News, email it, facebook it, youtube it. Go, go, go, go, go!