One of the oldest copies of the New Testament is the Rylands Papyrus P52 fragment which records a portion of the Gospel of John’s chapter 18. It contains the exchange between a beaten and bloodied Jesus and Roman procurator Pontius Pilate. “Everyone who is of the truth hears my voice,” states Jesus, to which the Roman officiate replies “What is truth?”

As you can see, our modern, skeptical world did not invent the questioning of foundational truth.

In PART 1 we explored the mischevious way of questioning truth but there is also a legitimate route. Philosophers have historically sought to identify how it is we come to know anything. Afterall, if we are not careful about what we believe, we run the risk of believing the wrong things. The branch of philosophy that deals with the “theory of knowledge” is known as epistemology.

Epistemologists define what it is we must do to discover the truth of things. Unfortunately there are as many theories on knowledge as there are ice cream flavours. In the following text we seek to defend a specific type of epistemological approach: the correspondence theory of truth.

Correspondence Theory of Truth
This is one of the most simple and straight-forward epistemologies you’ll ever run into. This theory states that truth is whatever statement corresponds to reality. Bertrand Russell used the example “the cat is on the mat.” For this statement to be considered true, he argued, there would have to be a mat with a cat on it. Simple as that. If there were no mat, the statement would be false. No cat, no dice. If the cat was next to the mat or the mat was on the cat, no cigar. 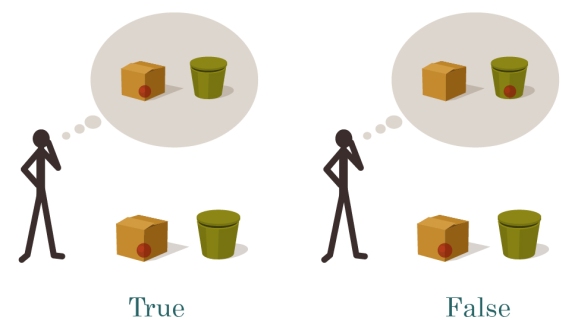 Perhaps the reason this theory of knowledge is so basic is because it happens to be true. Philosophers often over complicate things but when the rubber meets the road, we all use the correspondence theory of truth. When I cross the street and I see a bus coming my way, I don’t question my sense data or ponder whether or not the Buddhist theory of the world-as-illusion is true.I posit a single statement in my racing mind “there is a bus coming right at me” and then I proceed to get out of the way. Children are taught to live by the correspondence theory of truth. We don’t want them crossing the street with any other mental structure. We also don’t want them to tell us whether or not they’ve done their chores any other way. Whenever we perform scientific experiments we measure our results based on what is there and write our reports accordingly. What we say whenever we talk is expected to be according to what is really happening. And we expect others to extend us the same courtesy. To sum it up, this type of knowledge theory declares that any statement is true to the degree to which what it states relates to what is.

Could anyone believe in any other form of truth? Well, yes. One of the main opponents to this epistemology is the Coherence Theory of Truth. This theory claims that a statement is true if, and only if, it is consistent (i.e.: coherent) with the set of beliefs in which it is contained. For example, during Europe’s great Plague, people placed bread and milk on their supper tables. They left them there until the bread got moldy and the milk curdled. According to their beliefs, the rotting foods were spoiling because they were actively absorbing disease and therefore protecting the family. They did not know about micro-organisms such as fungus or bacteria, so within the context of their knowledge their beliefs were “true.”

The underlying belief supporting this theory is the notion that no group of thinking people, regardless of their era, has ever enjoyed total knowledge of the universe or reality — or even local affairs. Therefore we cannot guarantee that any of our beliefs actually fully correspond to reality à la Correspondence Theory. So the best we can do is say that, given a limited amount of knowledge, our beliefs are coherent within the context of our current knowledge. As you can imagine, Moral Relativism lives happily within the Coherence Theory of Truth. Given the fluidity and complexity of human psychology and culture, who are we to say that Western ideals should be brought to judge tribal rituals in East Africa? How can we know that cannibalism and head hunting are wrong in the same way I can know at what temperature water boils at sea level. Interestingly, after its defeat in World War 2 and its consequent court trials in Nuremberg, Nazi regime officials claimed that, due to moral relativism, the Western world had no right to judge German actions in Auschwitz. One of the judges presiding over the trials swiftly deflected the Nazi defense by appealing to Objective Moral Law, stating “These men should be tried on this basis: on a higher law, a higher law which rises above the provincial and the transient.’”

It is understandable for Coherence theorists to argue for their position. I would actually agree with this epistemology in a limited sense. Afterall, we can only make statements based on what we know. And what we know is often overturned to our amazement. However, Coherence Theory is temporary at best. Because whenever a Coherence Theorists judges whether or not a statement needs to be rejected, he or she does so based on what actually is. In short, they use the Correspondence Theory to judge which Coherence statements need to be thrown out and replaced with a better (i.e.: truer, more corresponding) statement. Not only that, but the Coherence Theorist’s statement that “we don’t have full knowledge of Reality” is itself either true or false based on the Correspondence Theory. I doubt the Coherentists are unsure as to whether or not humans exhaustively know all there is to know about reality. We all know we don’t know everything. And that very admission corresponds to reality. Fully and actually. Which is what Correspondence Theory claims is possible.

A hallmark of Correspondence Theory is the Law of Non-Contradiction. Aristotle argued for this Law in his work on logic. Simply put, something cannot be and not be at the same time. Either there is a wad of paper in the waste basket or there is not. It cannot be both in it and not in it at the exact same time. This Law is usually formulated by saying:

A is A and is not B. Very straightforward.

Although there are a few instances in which the “Both/And” seem to be accurate (for example, I am BOTH my mother’s son AND my wife’s husband) it is not applicable as a world view. I can be two things to two different people, but in the example of my mother and wife, the Law of Non-Contradiction still applies. If there was anything different about my mother’s son and my wife’s husband, they could never be the same person. Philosopher Ravi Zacharias tells and entertaining story about a discussion he had with a professor of Eastern philosophy. The professor argued in favour of the “Both/And” model of logic as being superior to the “Either/Or” system. During a lunch encounter, the professor kept highlighting the differences between the two systems of thought. Over and over again, using multiple examples he delineated the incompatibility of the two and his preference for the “Both/And” logical system. At one point, philosopher Ravi Zacharias paused and asked the Eastern philosophy professor: “So you are saying to me, EITHER I use the “Either/Or” logic OR the “Both/And” but I can’t use BOTH of them?” According to Zacharias the professor nervously replied: “The “Either/Or” does seem to emerge, doesn’t it?”

In the end, the Correspondence Theory of Truth, with all it entails (i.e.: the Law of Non-Contradiction and “Either/Or” dualistic logic) emerges as the way we ALL think, whether or not we realize it. As a result it is the universal epistemology and competing theories can go to bed.