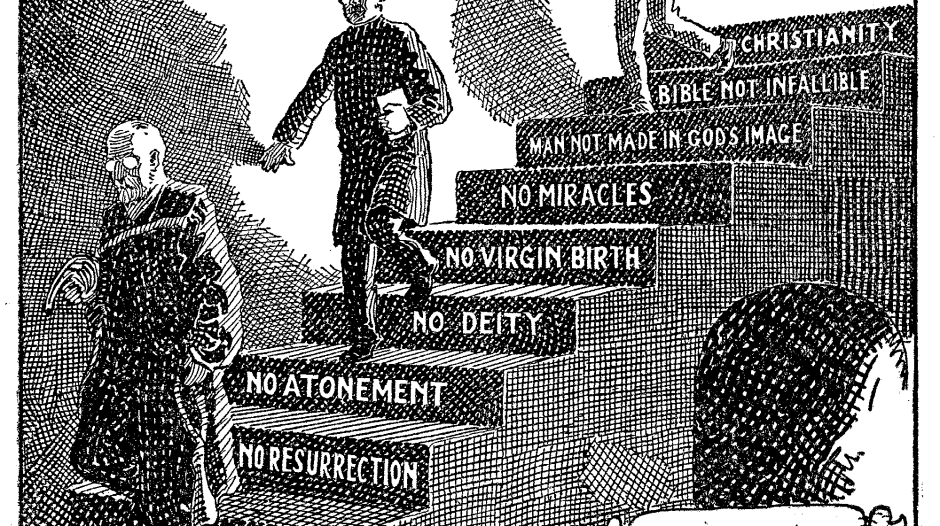 *the tone of this article may seem a bit aggressive. It is meant to be. Sometimes it is more biblical to be visceral as well as accurate (Rev 3:16).

I can respect an honest skeptic. Heck, I can even stomach a former believer that has lost the faith (depending on their reasoning). But to this day, the one brand of human that makes my stomach churn is the “liberal Christian.”

Even the atheist has staked out a position. It is his own position in his own territory. It is the opposite of theism in every respect and the atheist admits to this and lives there full time. He turns his nose at God in plain site for all to see. No pretenses to piety. Full blown rebellion. Gutsy. I may disagree very strongly with the reasonableness of his position, but at least I don’t have to pay his rent. For the atheist truly has “moved out” of the Faith.

Liberal theologians on the other hand, live downstairs and use the attraction of  Christianity to attract many, unsuspecting spiritual seekers. “Come in,” they proclaim, “we will preach Christ to you, and let you feel the true power of His Resurrection.” Yet, as they begin to teach and preach, they rob Christianity of everything that makes it… well, Christianity. For those of you unfamiliar with the likes of Bishop Spong, John Dominic Crossan, the Jesus Seminar and church denominations such as United Church and Presbyterian, liberal theology is the belief that we live in a naturalistic world (i.e.: atheism) and that the bible is to be understood as a metaphor. According to liberal theologians, Jesus may very well have lived, but He was not God’s Son, the Messiah nor a Resurrected Saviour. Afterall, in an atheistic world, souls, gods and miracles exist only in the imaginations of sophisticated apes like us. Any mention of the strictly supernatural in the Bible was added by later generations of Christians to embellish Jesus’ teachings.

Bishop Spong explains the New Testament as a make-belief tale concocted by Christians to be a metaphor for Jesus’ true teachings. According to Spong and his ilk, what Christ actually taught His disciples was that they, just like him, were to see “God” as the Universe and life itself. Jesus taught them that their lives could “resurrect”beyond the grave if they loved others while they were alive.

Their loving and compassionate lives would impact the next generation and even live on perpetually in the domino effect of their teachings going from one epoch to the next. But there was no bodily resurrection, Christ did not ascend back to the Father, raise anybody from the dead, feed thousands with a couple loaves, walk on water and their will be no surviving the grave. For anybody. Not even Christ. In short, the world is purely natural.

Liberal theology is inseparable from atheism. Because it is atheism.

Which is why my nausea is triggered. There is something pathetic about masquerading as one business while, deep down, being a direct competitor to that business. In real-world commerce no one would tolerate this. It is, in fact, illegal. I can’t occupy a corner of a health food store and sell cigarettes. I have to pay for my own location, employees and carry my own insurance. I can’t squat in someone else’s business. Liberal theologians like Bishop Spong actually draw a salary for the episcopal church in the United States. He wears clerical robes while preaching atheism using the New Testament. He is an intellectual, spiritual and financial squatter.

If atheism is your brand, join their team. Using language such as “Christ,” “redemption,” “God” and “Resurrection” yet not believing in any of them is suspect. Trying to convince a trusting public that you are Christian is deceptive.

Liberal theologians will claim that they “know” that Jesus and His disciples would whole-heartedly agree with Spong and company. And that they would lovingly shake their heads at us poor, knuckle-dragging biblical literalists. If someone is this type of liberal Christian, I would offer some simple challenges:

I could literally go on and on. Liberal theology makes no sense of the actual texture, genre and historical interpretation of the New Testament. According to them, only in the past 200 years has the “true” meaning behind the New Testament been clearly understood by middle aged scholars living in a secular post-enlightenment culture.

Could it not be that the Jesus Seminar scholars and liberal churches are merely the by product of their culture? That they would be so intimidated — or bedazzled — by a secular world that they would gut the Bible of its intended meaning? Conveniently protected by thousands of miles and thousands of years from the bloody epicenter of the early Church, they do not have to deal with actual Christians who actually died as martyrs for actually believing in an actually Risen Christ that saved them from an actual Hell and gave them actual hope for an actual life beyond the grave. Liberal theologians are content to sing a song for you to dance to as your life dwindles back to the ashes from whence it came.

If atheism is their religion why not have the courage and moxy to get off the welfare of the blood-bought, charity-driven reputation of old school Christianity and start their own darn business down the street?…

One thought on “Liberal Theology – A Vomit-Worthy Enterprise”