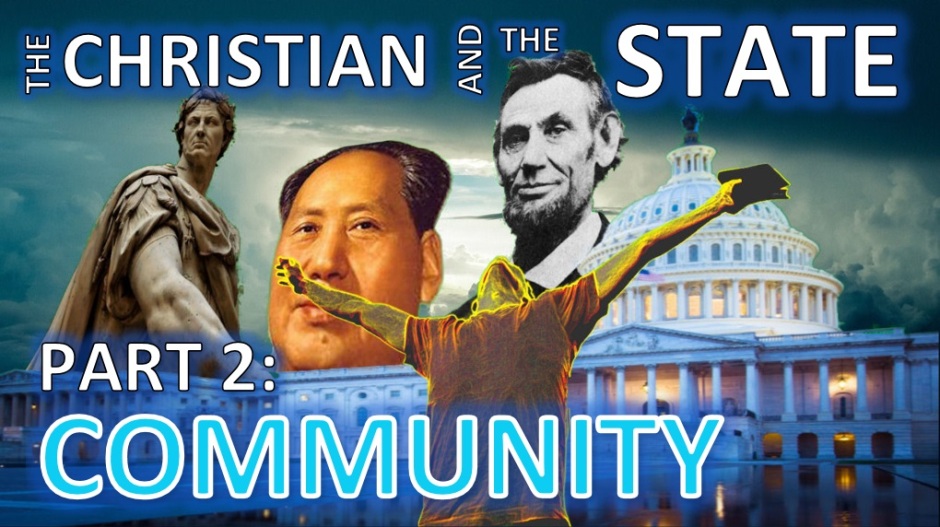 **this series is based on Focus on the Family’s “Truth Project” with Del Tackett. Click here for original materials.

In Part 1 of this series on politics we looked at the importance of studying our history so we can know what has and has not worked in government. Our past also helps us understand who we are and where we are going. Now, in our second part, we will look at the structure of human relationships.

Job 25:2 states “…He establishes order…” and 1 Corinthians 14:33 says “…God is not a God of disorder…” One look at nature and we can see this to be true. A chicken egg, for example, has over 10,000 pores to allow the chick embryo to breath. At 19 days the chick starts pecking downwards towards the air space which contains 6 hours of oxygen. This is enough to allow it to rest and then wrestle the rest of the way through the outer shell and be born.

Who taught the egg and chick to act like this? No one. It is a built-in mechanism designed from the Top-down. From a Designer to nature. A God of order not disorder. Another example of design is the community of the ant hill. There are 3 basic types of ants. The egg laying ants, worker ants and soldiers. Notice there is no “politician ant” or “bureaucrat ant.” No one to tell the ants what to do. Ants simply play out their nature and flow into a cohesive community where the labour is divided according to the types of ant. No single ant or group of ants are aware of how an ant hill system works. They are simply a part of the overall design. A design that comes from design.

Would it be shocking to us if human society also has built-in design that no single human can fully understand or appreciate let alone control? Systematic design and function is everywhere in God’s world. From our circulatory system to the water cycle of our ecosystem. Our study of “community” is really a study of the science of sociology. What is God’s natural order for human civilization?

In our modern secularized Western world we have adopted the atheistic Neo-Darwinian model of biological development. Humanity was not intended by Nature or her God but is an accidental meandering with no specific end goal. As a result of this biological model for human life, the sociological model for our secular, materialist world, according to materialists, is just as chaotic and disordered. There is no blueprint for what man and woman should be. Or how they fit together. No Top-down design. Therefore essentially anything goes. If it feels good, do it.

Yet the judeochristian model of humanity is radically opposite that of the secular realm. It is one of a humanity that is structured by God for a definite purpose. At the very root of reality is not physics or blind energy, but a personal God that is ordered in a community known as the Trinity.  God is group, not lone wolf.

God, as a result, was not lonely or in need and His act of creation was not to satisfy Himself but to allow creatures such as ourselves to enjoy Him and His infinite qualities for eternity. It was a selfless act. Humanity is the only part of God’s creative act — that we know of — that bears His Image. We are designed to be in close relationship — i.e.: community — with God. We are also to be in community with each other. And there is no more intimate human community than the family. The nature of God determines the nature of creation. Families are structured and ordered to come together in a specific way. God the Father is no more God than the Son but it is the Father that the Son submits to. In the same way, a husband is no more an image bearing creation of God than the wife, but Scripture calls the husband the head of the family. If submission is not too much for Christ to do, it is not too much for us to do either. To have proper submission to a proper authority is not an admission of inferiority but merely a recognition of the order of nature. Social order reflects the eternal nature of the Trinity. Relationship is at the root of reality.

Perhaps nothing could be more heretical in our modern times than stating that a man is the leader of the house hold. Or that a family is only between a man and a woman and the children they bear. Yet this is the judeochristian view and it is reflected in reality. Even homosexual couples have to create children in nature’s one and only manner: heterosexual unions. Either through adoption, sperm donors or a surrogate parent. And fatherless families are often triggers for juvenile delinquency in young males. In fact, a 1990 study by the Progressive Policy Institute stated that when we control for single motherhood, the difference between black and white crime rates disappeared. It appears that much the same way the uterus is the womb of a child’s body, the nuclear family is the womb of the child’s mind.

The Fall
According to the book of Genesis, the main consequences of humanity’s fall from grace was broken relationship.

Righteousness is, in part, achieved by reclaiming the natural order of human community. First within the family and then between families (i.e.: society).

When families are healthy they can more easily fit into the inter-family relationships of extended families, churches, organizations and civilization at large. However, if warped, families struggle to be cohesive and disorder ensues. Try building a design with melted Lego pieces.

If we abandon the natural design of families we cannot build society from the ground up. We cannot even build psychologically healthy individuals. Loving, caring, ordered families with proper models of authority and submission are the hallmark of the judeochristian blue print for living. Men themselves are under the authority of Christ and are not “gods” over their families. They are to be servant leaders who love and live sacrificially for the good of their wives and children.

Churches, work places, organizations and governments are institutions made up of individuals who follow a working order of hierarchy. Human civilization is community and that community follows a design that comes from outside of itself. Like ant hills and immune systems, human society is another design which has complexities that no single member of that society can fully understand. Therefore it should be no surprise that the most successful societies in our known history have not been oppressed by dictators, monarchs or bureaucrats but have been let free to play out their innate order. As our series unfolds, we hope to make this even more clear.

One thought on “The Christian and the State PART 2 – Community”